Anyone sailing to the European marketplace in the 1600s with a pouch of nutmeg seeds had his fortune made. This was the heyday of the spice trade when heavily armed armadas fought to defend loads of tropically grown treasure from pirates. Nutmeg was worth more than its weight in gold.

Europeans first found nutmeg trees growing on a small island in the South Pacific. Once Westerners acquired a taste for this spice, the battle to maintain a monopoly began. First the Portuguese, then the Dutch company Vereenigde Oost-indische Compagnie (VOC), dominated the trade. A VOC commander raided a British island with nutmeg trees and burned their forest to the ground.

Since nutmeg is a fertile seed, Dutch merchants dipped their cargo in lime to keep it from sprouting for the competition. Other VOC controlled islands were planted with nutmeg and jealously farmed. The mark-up rate soared to a staggering 6,000 percent. Counterfeit nutmeg seeds carved from wood polluted the market. Even in these conditions, sales were brisk.

Nutmeg possesses a distinct and delightful taste. Just a sprinkle of the powder enlivens a meal. Chefs used this herb for a second purpose, nutmeg soothes digestion as well. Affluent women of the time would carry silver pocket-sized nutmeg graters in their herb pouches so they could enjoy an after dinner dose of this herb. Rumors that nutmeg was an aphrodisiac and guarded against the Plague added more value to this spice. 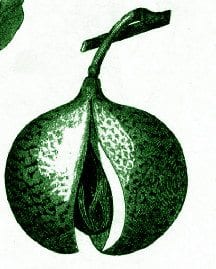 Nutmeg seeds are covered with a bright red spice called mace. Its flavor is more intense than nutmeg but the uses are similar. They both share strong anti-microbial properties that make them smart additions to toothpaste and skin creams.

Nutmeg is still valued for more than its flavor. Nutmeg oil is in topical pain medicine. It serves as a homeopathic remedy known as Nux moschata. Since doses larger than 5 mg can be toxic, nutmeg’s value as a folk medicine has dimmed. Yet, research on nutmeg’s control of diabetes is gaining recognition internationally. As a medicinal herb, it is regaining its popularity. This time there should be no danger from pirates.

Originally published as The Pocket Herbal on The Practical Herbalist website

This entry was posted in Herbs, History and tagged herbs, History. Bookmark the permalink.